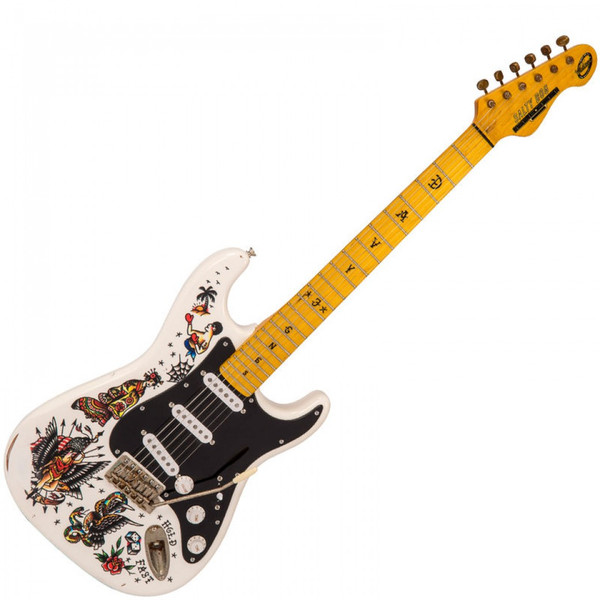 At age 17, Bill Downey started his career in the US Navy deep in the bowels of the USS America Supercarrier as a boiler technician. Over the decades and through numerous conflicts, the Vietnam War (1955 to 1973), the Lebanon Crisis (1983), the Persian Gulf War (1990 to 1991), Downey rose to the rank of Chief Engineer. Dedicating his whole life to the Navy meant forfeiting the chance to start a family, but Downey was not alone in this world - his faithful companion was a white electric guitar which he won in a gambling den in Cam Ranh Bay, Vietnam in 1963. As well as being a slick guitar player, Downey was also an avid collector of sailor tattoos, getting himself inked at every major port. When he finally ran out of space on his body, Downey used his trusty electric guitar to provide extra real estate. “My guitar’s been with me so long, it’s part of me now. If my ship ever sinks, that guitar will either be a paddle or a float.” In 1996 the USS America was decommissioned, which led Downey to retire and settle on land for the first time in his life where he formed blues funk band, “Howlin’ Albatross”.

Body: American Alder body, finished in Albatross white and adorned with John Washington’s signature sailor tattoos. Did you know the traditional swallow tattoo means a sailor has travelled 5,000 nautical miles? And that two swallow tattoos means they’ve gone over 10,000? We’re figure if you haven’t gotten your sea legs by then, you never will.

Bridge: The Wilkinson WVC Distressed Vibrato bridge is made from steel, just like the bows of the USS Americana. Tough and reliable then.

Pickups: Trio of Joe Doe custom designed Single Coils with vintage magnets on the bridge pickup and hotter ones on the middle and neck, so you can go between calm seas or mountainous waves.

Neck: One piece hard rock Maple neck and fingerboard with classic Vintage ‘soft C’ profile and ‘Davy Jones’ inlays. The back carve is comfortable and reassuring in the hand, like a bottle of rum.

Nut: Slippery 43mm Graphtech nut, so the strings glide over easy like seagulls wheeling on the sea breeze.