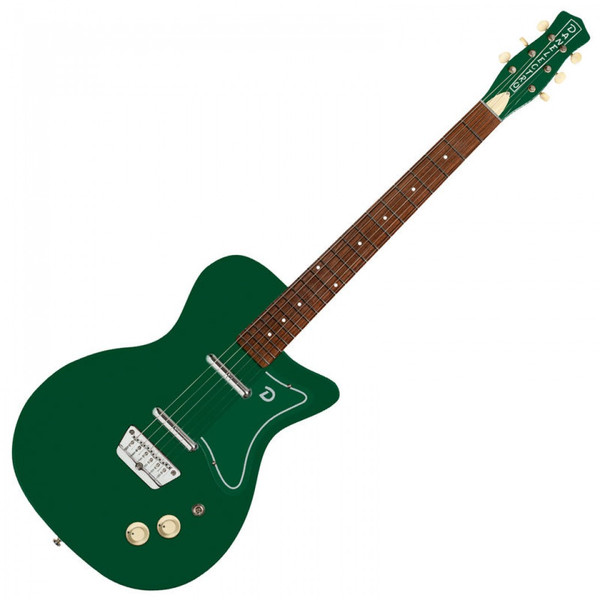 The single cutaway reissue Danelectro® ‘57, is another superb guitar that reflects Nathan Daniel’s innovation and his pragmatic touch of genius within electric guitar designs from the 1950’s.

The Danelectro ‘57 retains the vintage touches of the original 50’s U2 model (which will now cost more than your first car) making it one of the most sought after cool electric guitars for collectors, and for players who want a versatile guitar with great looks, exceptional playability and tones that suit many styles including blues, jazz, country, surf, pop and rock.

The clear see-through scratchplate with ‘D’ motif and perimeter strip is a must, along with the legendary coke bottle headstock, 3-aside vintage machine heads with aged cream buttons offset with a cream truss rod cover and cream vinyl body edging.

Cream is also the theme for what has often been described as ‘television type’ stacked volume and tone controls, delightfully worded in early catalogues as offering volume and ‘tone shading’.

Tone indeed, as the ‘57 also features the company’s flagship Vintage 50’s Lipstick® pickups, renowned for their ultra-clear clarity and sparkle in both neck and bridge positions operable via the 3-way selector switch, and the much loved and seriously addictive, syrupy punch and jangle in position two.

Whilst only in production between 1956-58 the original U2 was there at the beginning, and arguably one of the first electric guitars that helped start the birth of rock and roll. The reissue Danelectro ‘57 replicates a milestone in guitar history, an electric guitar that over the decades has been seen in the hands of some of the world’s most influential guitar players that have ever strapped on a guitar.