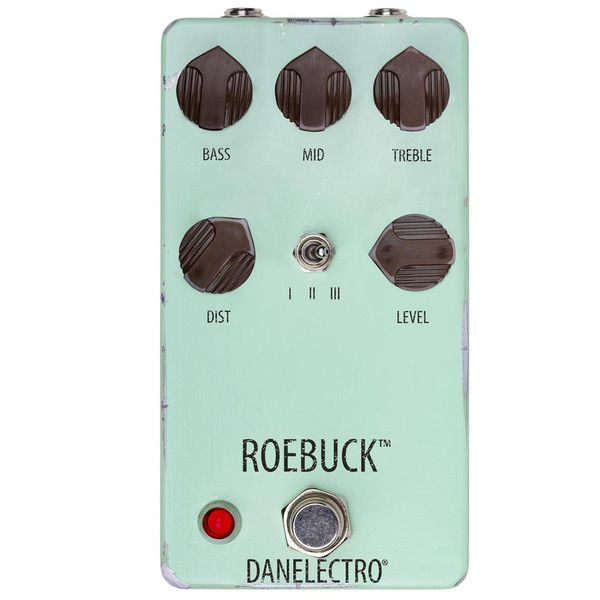 The Danelectro® Roebuck™ is a reissue of the original Ibanez® Mostortion™, first introduced in the 1990’s. Whilst only in production for a very short time, it’s much loved mosfet distortion and impeccable tone, soon became a must-have and an inspiration for guitar players in every genre, from country to metal.

They have become iconic in their own right, as arguably the best and most versatile overdrive pedals of their time and are highly sought after. There are very few original Mostortion™ pedals available now, most are being carefully nurtured on the pedalboards of some of the finest session players around the world including Nashville and LA, for a very good reason.

But now it’s back, in all its glory as the Danelectro Roebuck, delivering in true grit and grind fashion, all of that tasty original amp-like overdrive and tone.

The Roebuck is housed in a more robust metal chassis, looking the part in its wear and tear format, with subtle dings on the case, scuffed paint, sturdy control knobs and robust, soft-action footswitch.

While the unmistakable vintage core-tone voice remains, the new Roebuck now offers greater sonic flexibility with 2 additional clipping modes via a top-loaded mini-toggle switch, delivering the perfect amount of compression and mosfet overdrive without sacrificing the feel of the original pedal. All throughout, it has outstanding clarity and excellent string separation, whilst highlighting the extreme versatility of this long-awaited reissue distortion pedal.

With the ‘Distortion’ control set low, the Roebuck can excite the front end of any guitar amp, superb for subtle crunch style chords and lead breaks. Raising the ‘Distortion’ ‘Level’ and ‘Mid’ controls produces upper harmonics and increased drive for classic blues and screaming tube-like overdrive.

Scooped metal?...that’s certainly not a problem, by backing off the mids and upping the Distortion, the Roebuck will bring a smile to the hardened metal player.
Danelectro brings back this awesome pedal, nailing the original mosfet tone and distortion spot on, and with 2 new clipping options and robust build, the Roebuck is everything its predecessor was….and more!

Danelectro® is not affiliated with trademark owners for FOXX®, Ibanez® or Mostortion™